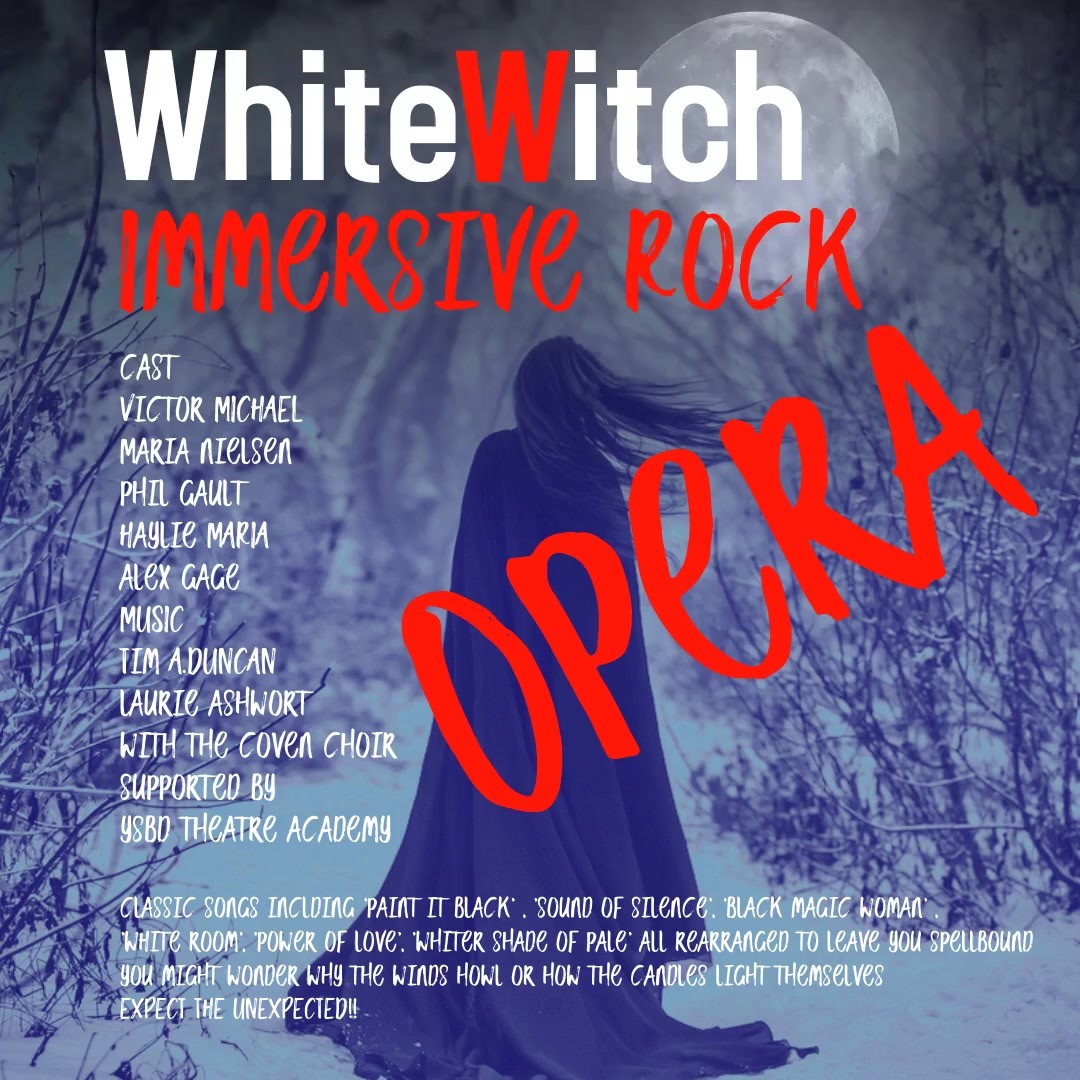 We will take you on an immersive, magical, rock musical journey through a world of darkness into the light, surrounded by a cast of 60 performers.

We will take you on an immersive, magical, rock musical journey through a world of darkness into the light, surrounded by a cast of 60 performers.

The Theatre has been designed to be COVID Compliant.

Written by The Beyond Theatre Creative Team

You will wonder how the candles light themselves and how the winds will howl as you sit surrounded by some of the greatest rock music ever written.

Black Magic Woman, Paint It Black, I Believe I Can Fly, The Power of Love, I Want To Break Free, Don't Let Me Be Misunderstood, White Room, The Sound of Silence and A Whiter Shade of Pale all rearranged to leave you spellbound.

Set in the 15th century, Callington village is recognised as a centre of malpractice.

Alicia is born into this life of black magic, but as a WhiteWitch, her powers can only be used to help others, which makes her an outcast. She is desperate to escape a world where The Black Witch (Tenebris) and The Black Wizard (Malum) use their magic for selfish and evil purposes. Ignisum the prophet openly damns the evil covens and he guides Alicia, helping her attract the attention of Validus (The White Wizard). Validus is blinded by her light and as he falls in love with Alicia, her powers become a beacon for reform throughout the world of witches and wizards.

Like oil on water good will spread over evil.

Along with a great story, fantastic music and wonderful performers, you will be treated to enchanting special effects. Smoking cocktails, meads, soups and wines and fare from witches’ cauldrons will be available as “Car service”.

The show starts as soon as you arrive.

Our DriveJockeys are in character and they will theatrically escort your vehicle to a designated parking spot inside the largest marquee in Europe.

You can bring your own folding chairs or of course hire ours.

You will be sitting outside of your car in an isolated area that has been planned to comply with social distancing.

Just relax knowing that you are inside the safest theatre venue in Europe.

Now soak up the atmosphere of a remarkable live performance.

There will be at least two performances at the DriveINSIDE Trafford Centre Theatre.

THE SHOW SOUNDS “SPOOKY” - IS IT SUITABLE FOR CHILDREN?

This is a family show suitable for children 7-15 years of age ,but they must be accompanied by an adult.

WHAT SHOULD I WEAR? COSTUMES?

If you want to dress for the immersive experience, then we’d love you to wear something 15th century and wizardly wonderful. Champagne is always presented to the Quirkiest Character! There is no dress policy as today no one would recognise a witch passing by them in the street. Dress how you want to – just enjoy the show!

WHAT SHOULD I WEAR – TO BE PRACTICAL?

Wrap up warm!! Bring a blanket (DriveINSIDE blankets are available)

The surround is part open so as to comply with COVID guidelines.

The ground is concrete and so wear boots rather than lightweight shows.

IS THE VENUE WHEELCHAIR FRIENDLY?

We suggest members of the audience that might have a problem climbing over to the driver’s side to exit, sit behind the driver in rear of the vehicle.

All purchases (tickets, drinks and food) are sold as non-refundable. You may change the name on your tickets without charge, but we are unable to offer refunds regardless of circumstances.

If the government or local authorities instruct that the event must be cancelled then the show will be postponed and tickets transferred.

Victor Michael was born in 1981 in Manchester to a musical family going back generations. His Grandma was a concert pianist who received a Fellowship whilst only a teenager. His Father was a very successful band leader. His mother was a singer and dancer until she recently retired at 65! Victor began his professional career at the age of 17, playing the guitar and singing in his fathers’ band at the famous Manchester Ritz Ballroom, now known as the HMV Ritz.

After this apprenticeship Victor trained Classically at the Royal Northern College of Music where his love of classical singing developed and blossomed.

At the age of 32 Victor Michael is one of the most successful and sort after Tenors in the UK. He has performed his show all over the world. Frequently boarding the most luxurious of cruise ships, Silver Seas, Oceania, Royal Caribbean, Celebrity, (Solstice Class) Princess and the UK’s very own P&O Azura and Ventura. Victor’s voice has also had him travelling to Dubai, performing in their private members Polo Club and singing at Corporate Events and Weddings in locations such as Milan and Tuscany.

Another major part of Victor’s career has been his recording and song writing. He has had the fantastic opportunity to work with some of the most successful record producers in the world – Peter Collins, Gordon Lorenz, Tim Duncan, Steve Millington, Roberto Danova and Lee Monteverdi.

‘The Phantom of the Opera Ice Show’ was Victor’s first major studio session work, and he was asked to feature on several of the songs in the show. It was produced by Roberto Danova who is a renowned and well respected Italian producer. The ‘Phantom of the Opera’ DVD and sound track is available now.

During the above recording Victor was overheard and consequently invited to record in Nashville Tennessee. A wonderful experience and amazing for him to be able to see some of the world’s greatest musicians at work.

Corporate work features heavily in Victors diary and he has had the pleasure of performing at events and venues such as The Ciao Italia, Manchester City Football Club’s Gala Dinner, Red Cross Ball, The Midland Hotel, Manchester United Old Trafford and the Old Trafford Cricket Ground.

Victor has also taken his show on tour as a solo act with his Orchestra but also with his ‘Three Sopranos’ performing in Theatres such as The Buxton Opera House, The Blackpool Opera House, Gracie Fields Theatre, The New Floral Pavillion and the Birmingham Symphony Hall.

Victor’s voice and persona on stage also lends perfectly to Weddings and private functions, performing in beautiful Golf Clubs around the country and also regularly providing entertainment for The Masons, The Rotary Club and various Warner Hotels.

Victor Michaels’ golden voice speaks for itself. His relaxed and natural manner onstage enables Victor to reach out to a varied audience, bringing classical music to the masses.

Victor currently resides in Manchester with his Wife and Daughter.

Welsh-Irish baritone Phil Gault has performed internationally, in roles ranging from Don Giovanni and King Roger, to the Count, Dandini, King Roger, Escamillo, and even Carmen in the critically acclaimed all-male CarMen.

He has performed with Scottish Opera, Opera North, Heritage Opera, Buxton Festival Opera, Northampton Festival Opera, and Secret Opera, is principal baritone for Opera on a Shoestring, co-founded Black Sheep Opera, and is a Samling and a Crear artist. Other rôles include Nabucco, Tarquinius, Junius, Nick Shadow, Angelotti, Morales, El Dancaïro, and Chao Lin (A Night at the Chinese Opera).

Phil has performed recitals in the Usher Hall, the Wales Millennium Centre, the Riverfront Centre and Paxton House, and is an aLuMNus of Yehudi Menuhin’s Live Music Now! scheme. His song repertory includes Dichterliebe, Chansons Gaillardes, Songs of Travel, Italienisches Liederbuch, and A Shropshire Lad, and his oratorio repertoire ranges from Carmina Burana and A Sea Symphony to the Bach Passions and cantatas, in venues from the Glasgow Royal Concert Hall and the Usher Hall, to the Sheldonian Theatre, Oxford.

TV includes live broadcast recordings of the title roles in the award nominated Macbeth and Barbwr Sefil with Opra Cymru, and audio includes Breathe Freely (Wagstaff), A Brontë Mass (Wilby), and A Breathless Alleluia (Wilby), the latter two with the Black Dyke Band.

Recognised as one of the country’s most exciting young talents, he has appeared in GUYS AND DOLLS, THOROUGHLY MODERN MILLIE, THE WILD PARTY, THE BEAUTIFUL GAME, as well as classics such as AS YOU LIKE IT.
A diverse artist he also enjoys pantomime with a recent performance in Peter Pan.

Hayley’s classically trained voice has taken her all over the world. Earlier in her career, she was chosen to be a principal vocalist for Headliners Theatre Company and cruised aboard Oceana, Adonia and Ventura for more than five years. More recently she has performed in the UK in many Theatres and Major Show Venues, as a soloist and also with her husband fellow singer, Victor Michael and her own creation, The Three Sopranos.

Beyond Theatre extend a special welcome for Maria our WhiteWitch. The role might have been designed for Maria who sings her way through a world of darkness transforming all around her to a world of light.

Maria is an English/Danish singer from Manchester and trained at the Hammond school on a full scholarship in professional Musical Theatre. During her time there she appeared in shows such as Crazy for You (as the leading role “Polly”), Chicago, Miss Saigon and won the schools award for Vocal Accomplishment. She now takes on her leading debut in this role.

Born in Manchester, Tim is a composer, conductor and a sound engineer. He is probably best known for his work around the world on major ice shows also with recordings featuring artists including Joe Longthorne, Chris Farlowe, Ruby Turner, One Way System and the Brass & Voices of Wales. In 2007 a production of Swan Lake featuring Duncan's completely rearranged score by Tchaikovsky received "Best Touring Theatrical Show 2007" for the season at The Lowry, Salford and by the Manchester Evening News.

Educated at Queen Elizabeth's Grammar School, in 1974 he joined the Middleton Band, playing Tenor Horn conducted at the time by Gordon Dean, whilst receiving tuition on French Horn from Ifor James and Michael Purton. Later he studied theory and composition at the Royal College of Music.

From 1987 he worked in sound engineering with notable artists in studios across the country, including Parr Street Studios Liverpool, Strawberry Studios Stockport, the famous Abbey Road Studios in London and MosFilm Studio in Moscow. From 1996  he has been involved in theatrical collaborations including Cinderella on Ice (composer),Swan Lake on Ice (arranger and conductor)and Sleeping Beauty on Ice (arranger and conductor) with the Imperial Ice Stars. Further productions include Peter Pan on Ice (composer) in 2019 and prior to working with the Imperial Ice Stars he recorded scores for The Phantom of the Opera on Ice(sound engineer and arranger),the Nutcracker on Ice (arranger and conductor) and Barnum on Ice (composer) with the RussianIce Stars.In 1998 he began recording "Credo" with producer Robero Danova with the final album of which was then released in the millenium year.

(excluding all taxes and fees)